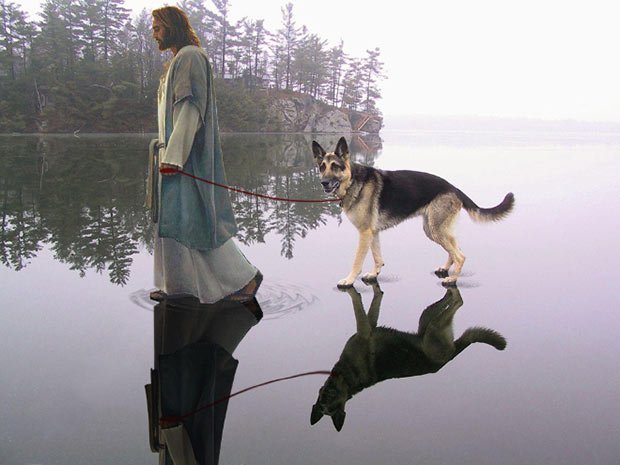 Theologians announce that Jesus was ‘a dog person’

INDIANA, USA – Leading theological scholars at the University of Notre Dame have today confirmed what has only been hypothesised for thousands of years, that Jesus was in fact a ‘dog person’.

A recent analysis of scriptural and archeological evidence led the scholars to claim that there was in fact overwhelming support for the position.

Professor Johan Shepherd, from the Department of Natural Theology and Spirituality, laid out the case in the University’s latest journal:

“Although some might say dogs appear in negative contexts in the Bible, such as in insults, it must be remembered that they are not listed as ritually “unclean” animals.”

“In the second century B.C., Jews viewed dogs positively, and we can conclude that Jesus even had dogs eating scraps under his table from his interaction with the Syro-Phoenician woman in Matthew 15:27.” Professor Shepherd explained.

“We also did scientific testing on a number of relics including the shroud of Turin and a piece of the True Cross. Canine DNA was discovered on both – that of a Bloodhound – which we can assume was Jesus’ close companion.”

There has also been some speculation as to whether dogs may have actually been involved in aspects of Jesus’ ministry, with some writings indicating that Jesus was often encouraging his disciples to ‘heal’.

Sign up to the Damascus Dropbear for more ‘Animal Saint’ news