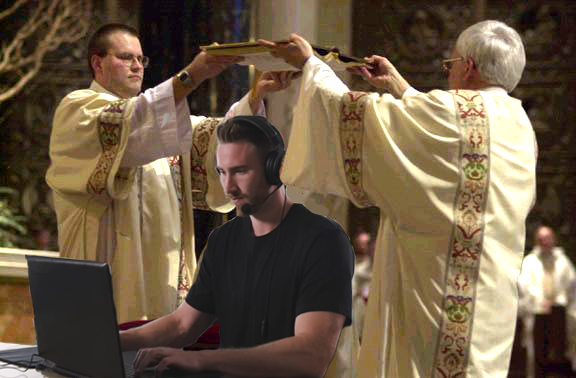 Keyboard missionaries anointed to argue with atheists on Facebook

SYDNEY, NSW – The Sydney Diocese of Anglican Church has held a special anointing ceremony to commission a new spiritual order of ‘keyboard missionaries’ whose focus will be to evangelise and debate finer points of doctrine through various social media platforms.

The new missionaries, officially termed ‘The Holy Order of Spiritual Keyboard Crusaders‘, will be employed by the Anglican Church and sent out into the internet mission field from January 2021.

Newly appointed missionary, 31 year-old Clancy Bailey, expressed his honour and excitement at being among the first recruits for the new order.

“I’ve always felt called to the Lord’s work in the mission field of digital debate, and I pray that the Spirit of God flows through my fingers at 120 words per minute.”

“There are just so many lost souls out there who use circular reasoning, strawman fallacies or ad hominem attacks to justify disbelief.”

“They need someone to share God’s truth, wisdom, grace and zingers, and I am proud to be among the chosen.”

The commissioning ceremony involved the anointing of headphones with oil, readings from Psalm 1:7, 1 Peter 3:15, and Isaiah 1:18, and full immersion of the blessed laptops in holy water.

Bishop Glenn Davies, who oversaw the commissioning, expressed that, in light of COVID, traditional missionary work needed to be reimagined.

“Since we can no longer send missionaries overseas, we must now be more intentional about bringing the gospel to a locked-down world.”

“They may not face traditional dangers, but the reality is that they is still the very real persecution of being blocked or hated upon, as well as the imminent threats of pornography and RSI.”

It is further reported that the new missionaries will live together as a ‘basement brotherhood’ in close community, supported by a group of volunteers who would provide regular snack food and prayerfully intercede for good comebacks.

The Bishop was also questioned as to whether only males were allowed to be ordained in the new order. He indicated that this was not the case, and that females were welcome, but for some reason no females had been interested in being involved.

Sign up to the Damascus Dropbear for more missionary news.